If you're a man who likes to crossdress, you know it's not always easy to find cross dressing clothes that fit you and make you feel feminine. You also might not feel comfortable shopping in person. Fortunately, multiple online venues cater to the crossdressing market. LoveToKnow interviewed a notable speaker, author and crossdresser Gina Lance on the subject. Gina has written a book on crossdressing and she is the editor-in-chief of the Website, TGLife. In this exclusive interview, she fills us in on such issues as attitudes toward crossdressing, misconceptions about crossdressers, and those who influence her personal style.

At what age did you begin cross-dressing? What led to the realization that you were more comfortable in women's clothing?

I call myself a textbook crossdresser because like most other CD's, I began experimenting with female clothing when I was about five or six years old. This mostly consisted of sneaking into my mother's dresser drawers to examine her lingerie. But I also began studying what girls wore on television shows. Now granted, like most boys my age I dressed as a cowboy when I could, but I also had thoughts of wanting to dress female. Nowadays, I'm equally as comfortable dressed as a man, or dressed as a woman. But it took a long time to get to that point! I went through many years of denial, just like most crossdressers do, because I feared expressing myself or talking to anyone else about it. After a few halfhearted attempts over the years, I finally got up the nerve to get made up, dressed and out of the house to meet others in 1996.

Can you name some of the major influences in your life who've helped you develop and define your style of dress?

I have to admit I am into a bit more of a glamorous style that some transgender people - I'm definitely a fan of old Hollywood and I feel that if I'm going to bother getting dressed and doing my makeup, I should look as good as I possibly can. If I had to name names I'd say that Ava Gardner, Elizabeth Taylor and a few others helped shape my image and I've just tried to update it a bit. Nowadays, I look to Heidi Klum for style. 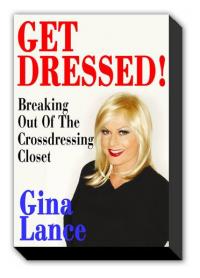 What led you to write your book, GET DRESSED! Breaking Out of the Crossdressing Closet?

There are a lot of books out there by postoperative transsexuals (people who have changed their sex) but not many by crossdressers. Simply because the majority of CD's don't want exposure and do worry about being discovered as a man who dresses as a woman part time. Crossdressers worry what others' think and the possible reaction it would bring from their family, friends and work. I wanted to tell my story in GET DRESSED! so that other crossdressers could see they were not alone, and what they were going through - I went through. I also attempt to offer words of support and some good common sense that I feel every crossdresser can benefit from!

In your experience, where do the cross-dressers you know shop for clothing? Are they comfortable shopping in person or do they prefer to shop online?

It varies on the individual - many crossdressers shop both online and in physical retail stores. Some like to go out shopping dressed, and in many cities virtually no one you might run into cares. In small towns, or rural areas, or for those who are afraid to make purchases in person, Internet shopping is great! I do both - shop online and in person. It depends on what I want and where I can find it.

The first time I went to buy high heels at a regular women's store, I chose Frederick's of Hollywood at their old Hollywood Boulevard location. I figured I'd walk in, tell them I was a crossdresser, and see if I could try on a few pairs of shoes in the back room. I figured being Frederick's, nothing could shock them. When I approached the shoe section, there were three other men trying on heels, and no women to speak of. That's when I realized I really didn't have to worry much about it! But again, that depends upon the store, and the location. 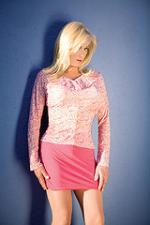 Have attitudes toward cross-dressing softened since you first started?

Yes, they have. And a lot of that has to do with the media. When crossdressers and transsexuals are shown with respect on television and in films, it helps to broaden the general public's perception. In my view, a lot changed when the Drew Carey show featured his television brother's character as a crossdresser - it brought crossdressing into the nation's living rooms. Comedian/actor Eddie Izzard winning two Emmy awards as an out crossdresser also helped. I'm a firm believer that gaining acceptance can't be legislated, but rather occurs over a long period of time.

What do you feel is the biggest misconception about transgender individuals?

There are a lot of misconceptions about TG individuals, most of them being that any man who dresses as a woman is gay. Well, here's a shock - some are! But crossdressers can be straight, bisexual or gay. I think the majority are either straight or bisexual. Many crossdressers I know have very macho careers such as law enforcement, military or a powerful CEO job. Just because a man likes to wear women's clothes and has a feminine side, doesn't make him any less a man or effeminate. 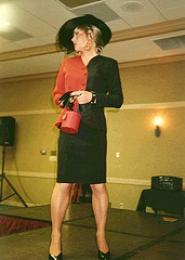 How does the website TGLife help the transgendered community?

TG LIFE was designed as a free news/entertainment interactive megasite for transgendered people. We use the term transgendered as an umbrella term, so it includes crossdressers, transsexuals, drag queens - whatever you call yourself. We have a wide range of columnists that transverse the TG spectrum, composing an even wider range of articles - informative, educating and self-help. All members of the TG community are included.

For our readers who would like more information on crossdressing and cross dressing clothes, Gina's book GET DRESSED! Breaking Out Of The Crossdressing Closet is available at Amazon.com. Thank you, Gina, for providing such great insight into a topic that can often be misunderstood, and for giving our readers -- those who crossdress and those who don't -- a wealth of valuable information on the subject!