Men's fashion during the Renaissance is of great interest to history buffs, fashion students, historical actors and anyone who wonders just how men dressed long ago. The fashions were much fancier than what men commonly wear today. The styles were distinct and often flamboyant.

Some examples of the styles men wore during this period include:

Hats were mandatory in public, so unless someone wanted to get a punitive fine, he wore one. Head coverings for men were either simple and plain or quite elaborate. A flat cap was an uncomplicated hat made of wool, felt or leather for the poorer classes, although middle class men usually sported a feather in their caps. Tall hats were exactly that when compared to flat caps -- a higher hat that was typically worn by men in the nobility.

Shirt sleeves were typically wide and billowy with an open neck. Rich men wore materials such as cotton, satin and velvet, while the poorer classes made do with flannel or other cheap fabrics. Sometimes, ruffles were incorporated into fancier versions. 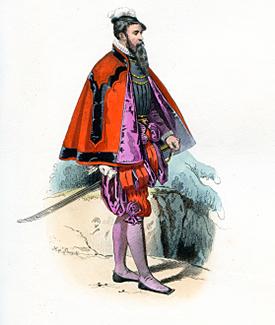 This piece of clothing is similar to a vest, but with cap sleeves or wings. Laced in the front and perhaps the back as well, it could fit a variety of body sizes. Doublets were worn over the billowy shirts and with belts. The richer a man was, the fancier his doublet was. Noblemen wore them in rich brocade patterns, quilted or with embellishments.

A jerkin is similar to a doublet. The main difference was it was worn over the doublet and had no sleeves at all.

Peasant men wore loose-fitting pants -- or trews -- which tied at the waist and laced around the lower leg. They were made of cheap materials. Noblemen, on the other hand, sported breeches, also known as Venetian breeches, that were roomy and loose. Men also wore "trunkhose" or "slops," which are the puffy garment common in depictions of this era. The onion shaped trunkhose had panels or slashes that sometimes revealed a contrasting colored fabric underneath and fit a man from his waist to his knees. No one had zippers. All pants fastened with button closures.

Like men's shoes today, these were rather basic and available in a limited range of colors. Boots were either a shorter ankle length or tall ones that came to the knee.

Noblemen and noblewomen wore hose. Wool was the most common hose (or hosen) fabric, but the very rich might have silken hose.

While cotton is a common and relatively inexpensive fabric today, during the Renaissance, it was quite a bit more costly. Some common materials in men's fashion during the Renaissance were wool, linen and fustian (cotton and linen combined). Leather, silk, satin, velvet and taffeta were exclusive to the upper classes. 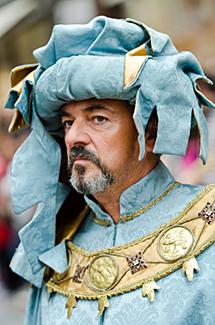 If you take part in historical recreations, wearing clothes that replicate the era is important to bring an air of authenticity to your performance. Check out local costume shops where you may be able to rent Renaissance costumes. Online there are vendors, who provide quality replica clothing, including:

Renaissance men weren't shy about showing off in their clothing and loved rich, opulent fabrics. Whether you're simply a history fan or someone who likes performing in Renaissance Fairs, knowing what styles men wore during that time will not only teach you quite a bit about fashion history, but also make your performance authentic.

0
Comments
© 2006-2021 LoveToKnow, Corp., except where otherwise noted. All Rights Reserved.
Men's Fashion During the Renaissance